1. Basic information about the town 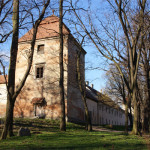 The town of Zhovkva is located in the western part of Ukraine 23 km north of Lviv and 34 km far from Ukrainian-Polish border. The town is an administrative centre of Zhovkva district in Lviv region. The town lies at a height of 232 m above sea level at the foot of the Haray mountain (365 m, the Roztochya range of hills) by the side of the Svynya river (46 km) on the boundary of the Main European Watershed.

Zhovkva is one of the most famous and interesting small historic towns in Ukraine. The cultural heritage of the town is an outstanding asset of three nations – Ukrainians, Poles and Jews. Zhovkva is directly associated with the most conspicuous statesmen in Ukraine, Poland and Russia.

There are approximately 100 monuments of architecture of local, national and world importance, located compactly in a small downtown area. To this day the historic core of the town retains the original unique renaissance plan and features of the town centre. In 1974 the historical part of the town obtained a status of the State Historical and Architectural Reserve.

The clay, coal deposits and thermal waters were discovered within the city boundaries. Directly at the town boundaries there are three suburban recreational forest and park zones. Areas where the town is located are seismically and ecologically safe. The relief is mainly flat, there is no soil shear.

The total population is 13.316 inhabitants. In general experts give a positive assessment of demographic processes in the town, rejuvenation trends and population growth are indicated, the birth rate has been significantly increased during the last decade, the level of education remains relatively high. Balance of migration is positive.
The number of workers employed in sectors of the town economy is 7.1 thousand people. Unemployment remains at level of 4% of working-age population (real unemployment is higher). 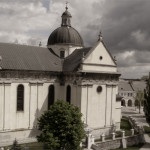 The town is one of the best economically and geographically located small towns in the region:
1) close to Lviv, the big economic, cultural and tourist centre in Western Ukraine;
2) close to the border with the European Union;
3) close to wholesale trading networks and business centres in Lviv and boundary regions in Poland;
4) in cross-border region of Ukraine and Poland, to which EU economic and technical assistance programmes are directed;
5) in two Euroregions – “Bug” and “Carpathian”;
6) directly borders with a large natural recreation territory of cross-border Roztochya highlands;
7) is in the centre of one of the biggest agricultural districts in the region, which specializes in the cultivation and processing of agricultural products and has great potential of local alternative renewable fuels production;
8) on the international road fork.

Essential resources for economic development of Zhovkva is the cultural heritage of the town, natural and recreational potential of Roztochya, and possibilities of district agricultural product processing. On the southern outskirts of the town near the brick factory the clay reservoirs, which are used for the ceramic bricks production, have been managing. Within the town the pressure hydrogen sulphide water with surface temperature of 39°C has also been found, which can be used for the balneological and thermal purposes. 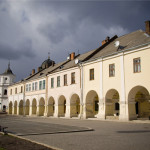 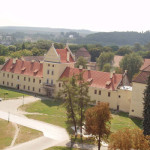 Central water supply in Zhovkva is provided by the municipal enterprise “Zhovkvavodokanal”.

To ensure water supply for the residents three bore-holes and a station of second elevation have being operated. The boreholes are located in Mokrotyn village (4 km far from Zhovkva). 4.5-kilometer-long pipeline operates from the pump station to the town reservoirs. The boreholes productive capacity is 6700 m3 per day. The actual water production is 1200 m3 per day.

Centralized wastewater in Zhovkva is provided by the public enterprise ”Zhovkvavodokanal”.

The total length of main sewer pipes is 10.2 km, the length of street sewage networks is 11.3 km. The sewage pumping is provided by 4 sewerage pumping stations. Wastewater treatment is provided by a sewage treatment station, design capacity of which is 2000 m3/day. The actual amount of waste submitted to the treatment station is 600m3/day. The cleaning process consists of two stages – mechanical and biological treatment.

Electric supply in the town is provided by Zhovkva district electric networks, the branch of JSC ”Lvivoblenergo”, through district substation PS-110/35/10 kV.

Gas supply in the town is provided by a branch of JSC “Lvivhaz” from a high pressure gas pipeline “Kamyanka Buzka – Blyshchyvody” through a gas regulation station near the village of Blyshchyvody. From the gas regulation station the gas is served under the pressure of 0.6 MPa through a 5 km long 250 mm pipeline to three gas control points in the town; then under an average pressure of 0.3 MPa the gas is supplied to larger consumers and 14 gas regulation points of low pressure, which supply low pressure gas of 0.003 MPa to low-powered consumers. Currently about 70 km of medium and low pressure pipelines are operated, which cover about 90% of consumers.

Telecommunication services are provided by JSC “Ukrtelecom”, represented by Zhovkva telecommunication department of the Lviv branch. The town serves two telephone stations with a capacity of 3 200 phone numbers that basically satisfies the needs of the town residents, considering the fact of widespread use of mobile telecommunication (all mobile operators of Ukraine provide good reception within the town). One of the stations is digital. The stations are connected to the regional centre of fibre-optic communication line that ensures an appropriate quality of the services. 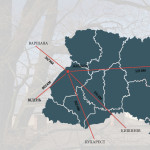 The distance to the regional centre – the city of Lviv – is 24 km. Average trip lasts 20 min.

The distance to the capital of Ukraine – the city of Kyiv – is 550 km. Average trip duration is 7 hours.

The distance to the state border with the European Union (Poland) “Rava-Ruska – Hrebenne” is 37 km. Average trip duration is 40 min. 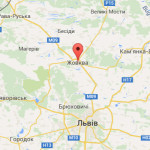 1) to Poland (E-372, M-09 Lviv – border – Lublin – Warsaw), the main transport communication with Lviv and Poland (EU). The road is in good condition (renovated in 2011). The necessary transport infrastructure is being developed along the road. It provides easy access to the town from Lviv for 15-20 min., from abroad – for 25-30 min. A bus route number 151 Zhovkva-Lviv departs every 10 minutes, and dozens of other bus routes from Lviv to the surrounding settlements, transit intercity and international bus routes provide very easy access to the town;

Zhovkva district has satisfactory automobile road network, which provides car and bus connection between Zhovkva and all district settlements. Unlike other small towns in the region, Zhovkva has the proper bypass ring road, which provides the bypass of built-up area of the town for all transit vehicles. The town main roads and streets, that provide access to the central part, are in good and satisfactory technical condition. 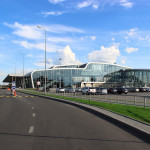 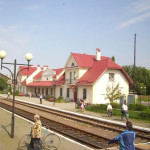 The nearest international airport “Lviv”, located 40 km far from Zhovkva, accepts all types of aircrafts. There is no direct connection between the airport and Zhovkva.

60 beds in 20 suites, a restaurant with a banquet hall for 250 persons, a conference hall, a swimming pool, play grounds and a tennis court.

Hotel for 26 beds in 17 rooms, a restaurant with a banquet hall for 240 persons, a night club.

52 suites for 105 beds, a restaurant with a banquet hall for 200 persons, a conference hall.

Zhovkva is located in the centre of agricultural district and industry is not well-developed. Small enterprises in the town mainly are specialized in agricultural products and wood harvesting and processing, and as well in printing products, metal working and metal works manufacturing. There are small construction, transport and trade enterprises, district enterprises of electricity, heat, water and gas supply. Private enterprisers mainly work in trade and service branches for inhabitants, and also produce millwork and furniture.

Main retail facilities in the town:

The service sector is represented in the town by the following sectors: